Buy us a beer

Become a Patreon supporter
Don't like Patreon? Drop a tip into our Paypal
Shirts 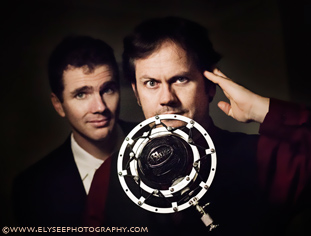 Smart Enough to Know Better have been heard on ABC radio and at the Brisbane Writer's festival. We were nominated for the 2011 UK Skeptics podcast of the year. We didn't win but then we're neither in the UK nor are we a skeptics podcast.

I've had a passion for science since an early age, and am a keen advocate of science education and lifelong learning. After years as a librarian I decided I needed to do something new and became a qualified high school physics teacher, and after a few years needed to do something even more new and now use my Masters in Astrophysics as a professional science communicator. I've calculated I'll have a new career every three days by the time I'm 60 if I keep up this rate of change.

I believe logic, rational thinking and perseverance are all that is needed to explain our universe, and that there is no substitute for evidence-based, peer-reviewed research. The human brain can be good at both Science/Maths and the Arts. In fact, I strongly believe the future of our civilisation lies in the wedding of rational thinking and creativity.

I’m a very silly monkey. It’s a good place to start because it means that any valuable information can get absorbed without risk to my ego. Imagine if I was a very clever scientist. I’d be in all sorts of trouble if something came along that was true but hard to believe. Silly monkeys can consider everything they hear.

I'm ever mindful that no matter what walk of life someone comes from they have knowledge that I don't and that they therefore have something to teach me. I find elitism to be ever so slightly more upsetting than hypocrisy. I’ve written hundreds of comic strips, dozens of songs and two halves of a novel.

My influences are Scott Adams and Richard Dawkins and I very much hope I don’t end up like them.